Connacht take on Zebre in Parma twice this season, so here is some information to help you plan.

The Pro12 encounter in September fell foul of the weather and will be rescheduled later. 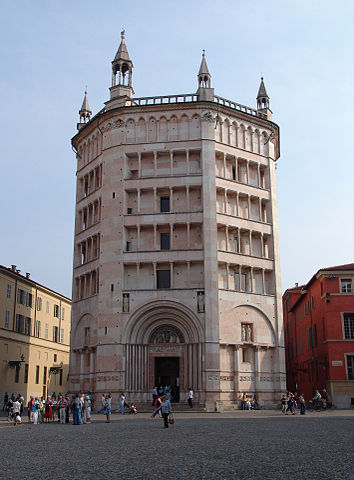 There are flights from London Stansted to Parma, but they leave at 0750 so it would require an overnight at Stansted airport. There are late night connections from Dublin and Shannon to Stansted. The return flight is not til Tuesday so if you want a short stay, best to return via one of the Milan airports. The Parma flights do not run in December or January.

Ryanair have flights to Bologna, but they go on Saturday and Tuesday (plus Thursday in October), so they are of limited use for the Pro12 game.

As the European game is on Sunday, however, flying to Bologna might be the best option. Depart Dublin Saturday 19.25 and arrive Bologna 23.10. Return on Tuesday 17.10 and arrive 19.00. That gives you a couple of days to explore Bologna afterwards.

Otherwise the closest airport is Milan Linate with Aer Lingus, though the flights depart very early (7am). They also return at 1120, which might make for an early start if you're enjoying the Parma hospitality the night before.

Aer Lingus also fly to Malpensa, which is the other side of Milan to Parma, but the flight times may be more agreeable (1740 going out and 2145 coming back).

Ryanair to Bergamo is also an option. They fly twice a day. It's awkward enough to get to, but if we have the numbers we will organise a bus or at least shared taxis.

If we have sufficient numbers on the same flight, The Clan may arrange a bus from the airport in one or both directions.
Otherwise, the best way is by train from Milan or Bologna.

The train station in Parma is on the north side of the city, walking distance to the centre, and on the same side as the stadium and the Villa Ducale (about a half hour walk, or take a taxi or bus).

The most popular hotel on previous trips was Hotel Villa Ducale . The Hotel is right beside the Stadium on the northern outskirts of the city, a half hour walk from the centre if you're a speedster, or a quick spin in a taxi for the front row forwards amongst us. The opposition players have been known to make an appearance on match day.

However, for most people, proximity to the city centre will be a higher priority, especially as taxis can be hard to come by in Parma. So if you plan to be out late, somewhere in town is definitely a better idea.

Some might also consider basing themselves in Bologna or Milan, depending on how match and flight schedules work out. Bologna can be reached in 50 minutes by train and Milan is not much further. Trains to Bologna run until 23.30 and start again at 4am so it needn't interfere with your social schedule.

Zebre Supporters' Club are arranging a dinner booking for us and possibly a trip to the Ferrari museum in Modena. See the comments section below for the latest on this.

The Highlander Pub on Via la Spezia was famously visited on a previous trip.
Dubh Linn is also a popular Irish Pub.

Both of the above are apparently closed on Sundays though, as are many bars in Parma, so won't be much good for post-match entertainment.

We will arrange something more definite closer to the time.
There are also several lively establishments on the streets around Strada Farini near Piazza Garibaldi that should be buzzing on Saturday night.

Around the City Centre, you can walk to most places. If flying from Parma Airport, bus number 6 connects it to the train station and city centre every 30 minutes.

For Villa Ducale and the Stadium, Bus 15 leaves from just opposite the hotel every 30 minutes. This bus doesn't run on Sundays.

There are more frequest buses (No 2 and 13) to and from the Centro Torri  shopping centre at the other end of Via Popolo, the short street on which the stadium is located.

All these buses continue on towards the City Centre and stop at Via Mazzini near Piazza Garibaldi.

Bus tickets are €1.20 if you buy them in advance from ticket agents. They can also in theory be bought on the bus for €2 but bus drivers do not generally seem happy about selling them to you. On previous trips a number of people got around this problem by just shrugging their shoulders and taking a seat. There were no reports of arrests.

If you want to walk from the centre to the Highlander, go down the pedestrianised Via Farini from Piazza Garibaldi (this is worth a look anyway as it is where the beautiful people go). After the pedestrian area ends continue on 50m and take the next right. This should take you to Ponte Caprazucca, across the dry river. Take the third left on to Strada Nino Bixio and on past a piazza and a roundabout onto Via La Spezia, where you should find the pub somewhere on the right.

Some fantastic architecture, including the fine Romanesque Duomo and the 16th century Palazzo della Pilotta

Keep checking here or follow the conversation on the Clan Forum