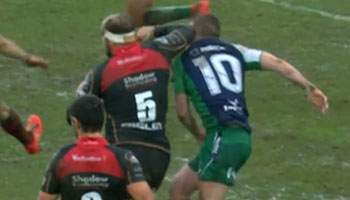 By Rob Murphy in Rodney Parade

John Muldoon led his side to the dressing room in Rodney Parade on Sunday evening, he and every last player with him were sodden from head to toe but hardly even noticing. The five point win came at the end of a battle on an aqua plain surface, which included three tries apiece, and a colossal effort from the 14 man Dragons team matched, and slightly surpassed, by a resilient and defiant display from the trailblazing westerners.

The victory marked an eighth Pro12 win on the season to equal their 2003/04 record, with seven games still to play. Pat Lam’s side are just two points shy of a new points record as well, with Treviso in town next Sunday shorn of their Italian internationals and facing a technically efficient, clued in home side that are not short on self belief right now.

From 10 am on Sunday morning the east Wales town of Newport was enveloped with monsoon like rain and the conditions seemed set to play a pivotal role in the afternoon contest, but the games defining element actually stemmed from one moment of madness in the 14th minute where home captain Rynard Landman hit Jack Carty late in the tackle, leading with the elbow and making contact.

The red card came after a video review and set the tone for the remainder of the game. Connacht had dominated the early exchanges with Craig Ronaldson’s try underlining their intent, a thundering line off a Jack Carty pass proved key for the Naas man to score and helped his side into an early lead. It was 10-3 when Landman saw red and the lead stretched out to 17-3 before the balance shifted towards the home side.

From there to the end this was a topsy turvy contest, with Connacht always holding the edge. A 17-11 half time lead stretched out to 23-11 before a converted try from the home side set up a tense finish, but when Mick Kearney chased down a blocked clearance to score try number three, the game was up for the home side who nabbed a late consolation  score with the last play.

We’ve known this for a while, but we haven’t really fully grasped it until this season. Getting into the top half of the Pro12 and staying there with a squad and budget like Connacht work off is extremely hard work and we are only now really getting a feel for this fact. You had to get to this stage to experience.

This was a third away win of the season in the Pro12, a fifth in all competitions and each one has been chiseled out with bare hands. Every minute, every tackle and every scrum has been a merciless contest contest. Yellow cards, sumptuous passes, clever footwork, lucky bounces, grubber kicks and tap tackles have added up. It has been a hard slog and this game was the epitome of such a slog.

When the season concludes, Connacht players will recall the dying seconds in Treviso when they stood beside a ruck inches from their line, gasping for air, clinging to a 9-6 lead and praying for a break.

They’ll think back to a late late lineout in Edinburgh in round two in what was a pig of game, where there was no room for error and a try had to be scored and they’ll think back to Newport on Sunday, the 72nd minute when they packed down for scrum in their half badly in need of a strike against the head and ready to convert.

Away wins are bloody hard work. They are rarely pretty. Connacht have managed three in the Pro12 this season, their record in one campaign is four. They are capable of getting there but the next one won’t be any easier than the last. If the westerners somehow manage to hold onto sixth spot right to the end of the season, they’ll have many war stories to tell.

There are other elements to this win that can’t go unchecked. John Cooney’s third start for the province was his best performance. In for the injured Kieran Marmion and barking instructions with confidence, backing it up with actions too. He had a stormer from start to finish.

Another to shine was Eoghan Masterson, in a few short weeks he has gone from the fringe of the starting eight position and on this, his first start, he grasped the chance with open arms playing superbly well for the 70 minutes he was on the field. His try was a masterpiece as he finished it with a surge from five metres and started it with a 30 metre break from a turnover in the lineout.

There were errors in defence, twice in the game the Dragons scored tries after going 15+ phases in the Connacht 22, wearing down the defence and exploiting errors despite the numerical differential, their third try at the death was not nice viewing either for Connacht and Lam and co will have plenty to pick a part in the video sessions.

Yet this story is on going, the journey looks like taking us close to the wire at this stage and for that, Connacht supporters have to be grateful. The Scarlets and Edinburgh slipped up last weekend and Connacht now have a two and four point advantage of them respectively heading into this winnable home tie on Sunday evening at 5:15.

How will this all pan out? It depends on a lot of unanswered questions. Seven league games and a European quarter final remain but for now it’s about Sunday and a trip to a Cardiff side that are in disarray a week later.

The dream scenario is two wins, that will pave the way for Bundee Aki, Robbie Henshaw and Kieran Marmion among others to return to the team in time for a hugely challenging final seven weeks to the season. They’ll need to return with sleeves rolled up ready to work because the last two games have highlighted that anything less than a full blooded approach won’t be good enough.