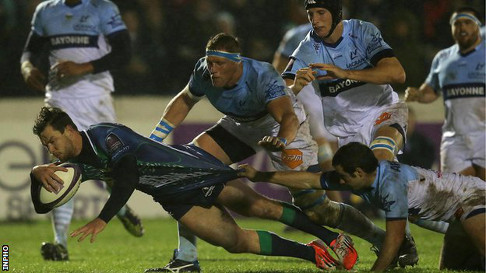 Ultimately everything went along expected lines at the Sportsground on Saturday evening. A 20+ point victory, five tries to one, bonus point wrapped up and Challenge Cup quarter final qualification still a possibility even if a much changed Connacht line up loses in the Basque Country next Saturday night.

The wind blew at Bayonne’s backs and the rain drove across the College Road venue towards Lough Atalia perhaps that aided the visitors clad in sky blue, because their sizeable pack got stuck in from the outset and despite fielding a team shorn of at least 12 rested front line players they played with purpose, determination and vigour.

It was surprising only because La Rochelle in round one of this competition had made similar changes and offered nothing like the continuity or direction that the powerful and well funded south of France side mustered here. The boot of Bustos Moyano accounted for their twelve first half points and while they didn’t threaten the Connacht line, they could easily have felt hard done by going in trailing by three.

After the game Pat Lam referred to the “peaks and troughs” in the Connacht display, a clear trough came midway through the first half where Bundee Aki had been pinged for holding onto the ball on the ground and Connacht found themselves defending a lineout within their own 22 and trailing 9-3.

This was not expected but adversity to some degree or another has come in every single one of Connacht’s eight wins this season. The complete display still eludes them, but they are dealing with adversity in every game and showing the metal needed to get out of tricky situations. They won a turnover on the first phase after that lineout and had scored two tries by half time.

Danie Poolman got both first half tries, bringing his tally to a team leading five for the campaign. The South African is getting a clean run without injuries and he is proving a prolific finisher. His finishing ability could be crucial in key games. Both scores were well crafted from a backline that has evolved and improved throughout this three game home stand.

The second half wasn’t all plain sailing, Filipe Lapeyrade bundled his way over for a try under the posts early in the second half to restore the Bayonne lead but only for a brief period. Jack Carty was having a superb day with the boot and he notched two penalties to restore the home side’s lead before Bundee Aki got the try that brought the loudest cheer of the night.

The new signing from Waikato notched his first five pointer after a disorganised visiting back three let a high ball bounce in their own half and the Kiwi flyer snapped it up and sprinted home for a popular score. The 24 year-old had 10 tries in 21 Super rugby appearances over the last two seasons so notching scores is a key part of his game and getting the first out fo the way augurs well for the westerners.

The bonus point came from Dave McSharry not long after that, a lineout catch and drive had Bayonne in trouble but it was stopped just shy of the line so Kieran Marmion went to the backline and Jack Carty timed his pass for a straight running Dave McSharry perfectly to allow the centre to power through.

To conclude the contest, the forwards got in on the act with replacement Willie Faloon crowning a good final quarter by touching down at the back of the maul. The flanker has been used sparingly of late and Eoin McKeon has proved an able replacement despite being slightly out of position at openside.

Sparing players will be at the forefront of the Connacht management team’s thinking this weekend with the Bayonne match coming six days before a pivotal clash with Leinster the following week. That inter-pro showdown at the RDS is Connacht’s next big test and they’ll want the team that started at the weekend to be fit and ready to challenge.

Talented second row Mick Kearney limped off early with what looked like an ankle or calf injury and his availability will be a major concern. Outside of that, the focus will be on rest with the likes of Mils Muliaina, Bundee Aki, Kieran Marmion and most of the pack including captain John Muldoon all prime candidates for a weekend off to recoup.

All the while, Leinster will be throwing body and limb at Harlequins in a crucial Champions Cup clash. It augurs well then and is certainly worth the risk of losing in France. Many of the young players who helped deliver key wins in Edinburgh and Treviso this year will be in and relishing the chance to shine.

A loss in Bayonne isn’t the end of their hopes as a home win over Exeter and a bonus point win in La Rochelle might still be enough to be one of the three best runners up from the five pools but whatever the case the main priority is this daunting run of inter-pro fixtures starting with Leinster away, following by a trip to Ulster before the home clash with Munster. That’s where expectations will need to be surpassed.