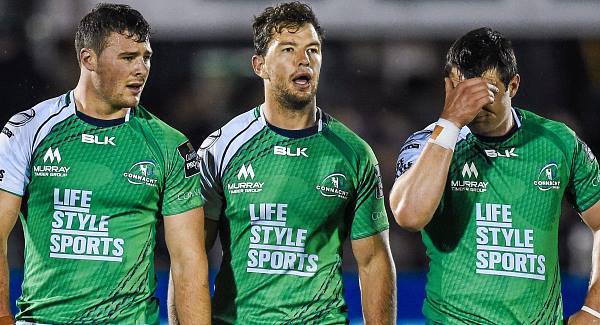 By Rob Murphy at the Sportsground

Everyone is trying to adapt to their new surrounds at the moment. Connacht players, supporters and management each seem to resemble a car owner who has traded an old mini for a fairly high end saloon. The extra power, pace and control is exciting but they are not quite sure how to get the best out of it just yet. It is all a little overpowering at times.

Top six is the aim. The open and public declaration of that target is commendable and invigorating for followers. Connacht are currently fifth after just one defeat in five outings and a return of 14 points but there’s a long way to go and a whole lot of rugby to be played and as much as every point gained is a huge boost, the ones that are slipping away seem equally as important, even if no one is quite sure why.

Points certainly slipped away at the Sportsground on Friday night. In front of another big Sportsground crowd, the men in green seemed tentative before the break before storming clear in a stunning ten minute spell after halftime only to relinquish a 14 point lead in a mini collapse during the last 12 minutes, It all felt like a defeat but it wasn’t a defeat and that’s something.

There might not be a lot of new faces in the green of Connacht this season but it feels like a whole new world based on clear cut advances in performance, tactics, attitude and application. Storming back from deficits and dominating teams in the third quarter has been the cornerstone of this great start and we saw it again here right up to the point where they were camped on the Cardiff line searching for bonus point and 24-10 ahead. The same Cardiff that had beaten them on nine of the last ten outings. A whole new world indeed.

Cardiff had led early in this contest, it’s not that Connacht had started slowly either, quite the contrary they were well on top in the opening exchanges thanks in part to a dominant scrum but also to a lively backline with a nice balance at 10 and 12 between Jack Carty and Craig Ronaldson - who made his first start at 12 in place of the rested Dave McSharry.

Ronaldson gives Connacht that oft talked about ‘second five eighths’ option. For the uninitiated, that simply means an alternative out half from one play to the next, another man who can kick in open play and turn the opposition back three, a second pilot to call upon once in a while, a man to ease the pressure on a young up and coming number ten. It seemed to work, a point best illustrated late on when Ronaldson had left the fray and the engine started to splutter.

The set piece was a mixed bag of brilliant and awful, scrums and lineouts, technical perfection and chaos. It was just one of those days for Dave Heffernan. He is making rapid progress in converting from flanker to hooker and his work rate around the field is superb but this was his worst day in the lineout. His throw wasn’t the only thing to blame of course.

In short, a bad mix up led to Cardiff’s first try, the overthrow sparked breakout from inside their own half and while Connacht eventually broke the play up, it was five metres from their own line and the carried over in-goal to cede a five metre scrum. From that scrum Adam Thomas scored the opening try.

It was 10-10 at halftime though, Connacht had roared back and Robbie Henshaw showed his power, and snipper like vision to find a gap beside a ruck on the Blues line before reaching out to score. That try had the home side feeling in control again and they ironed out some creases at half time to hit the ground running on the restart.

Early tries followed, Willie Faloon was superb throughout and from the back of a maul he spotted a weakness on the short side, attacking, drawing a defender and then releasing Kieran Marmion, who, for the second home game in succession, showed deft footwork in executing another world class side step before scoring in the corner.

Another lineout led to try number three soon after with Nathan White powering over and all seemed well in the set piece. At this stage the home crowd were in raptures and the home team were rampant. Craig Ronaldson was kicking with supreme confidence too, he nailed a second touchline conversion for a 24-10 lead and all was well in the world.

Cardiff were a beaten docket, their scrums were falling apart and their heads were down, Connacht made three more visits to the 22, but all of a sudden the errors crept back in, the questions as to why will be key to preparation for Treviso next Friday. They shunned two kickable penalties in search of the killer blow, a fourth try and they would live to regret that.

Two tries were conceded in 12 hapless minutes. Josh Navidi and Josh Turnbull were sprung from the bench and made a huge impact, Sam Hobs and Macauley Cook got the tries each under the post, each at the end of relentless attacks with world class ball retention. The 32 phases that led to the disputed final try were the most impressive. The ball did appear to graze the post on the TMO review but it was a tight call.

Connacht had one last chance to snatch a win with a drop goal but attempted the effort a little too prematurely and it was blocked down by the Blues. Mercifully it didn’t lead to a breakaway try down the other end, it might have done too. The final whistle left everyone feeling as though they had just got their first scrape on that new car. They knew immediately that it would soon be a distant memory but in that moment, it was a deflating feeling.