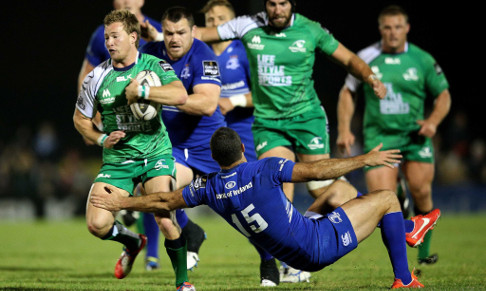 By Rob Murphy at the Sportsground

A clever and crafty performances underpinned by a resilient and well constructed sense of self belief, guided Connacht on Friday night. Rugby teams from the west of Ireland never seem to fear what comes from the east and Pat Lam’s men are no different in that regard but they are different in many other ways and that’s making people sit up and take note.

It would be wrong to say that Connacht stood toe to toe with Leinster from the outset or that they were the better team throughout the eighty minutes. They had moments where the self doubt must have been creeping through some cracks as Leinster stormed into a 9-0 lead and had two tries disallowed in a hugely impressive first half.

Boldly, defiantly and heroically Connacht stood firm though, as wave upon wave of onslaughts were unleashed. All the while, identifying problems, figuring out ways to sort them out and negotiating huge obstacles such as John Muldoon’s sin binning or Ian Madigan’s game stretching passes. It was a siege but the moat was not breached and all the while within walls, the plans were been formulated for a counter surge.

At half time, it all must have happened. One stat that stands out from an incredible start to the season - that has seen Connacht start with three wins from three in the Pro 12 - is their second half defensive efforts. Just three points conceded in three games. The half time team talks are becoming an integral part of the success, Connacht are analysing and adjusting and each week they emerge, a more informed and infused force after the break.

The second half wasn’t dominated by the home side but it was controlled, defensively they had Leinster hesitating in possession behind the gain line. Muldoon’s first half crushing tackle on former teammate Mike McCarthy and Robbie Henshaw’s memorable overlap stopping smash on Jimmy Gopperth had lifted the roof off both stands and instilled a sense of hesitation in their opponents.

It was a night less about passion and more about application. The aforementioned hits along with Dave McSharry’s thundering tackle on a shell shocked Rob Kearney in the second half were all technically brilliant and very much designed to disrupt and dishearten. Time and again, Leinster gave away penalties after being halted like that and their petulant reactions turned the game against them.

The foundations were laid by the 50 minute mark but the scoring opportunities remained few and far between. Jack Carty had two looks at the post in the first half, missing one, kicking the other. In the second half, the scoring chances were even less pronounced. So the way in which Kieran Marmion took his try is all the more laudable and memorable.

Robbie Henshaw had crashed up through two defenders and a ruck was formed ten metres out from the 22. Marmion was in snipping mood and Leinster were very lax at the fringe of rucks, so off he went. The initial spark of acceleration through the opening steps was electric and left Cian Healy flailing in the College Road wind.

The sharp intake of breath from the majority of the 5,971 was almost audible as their young international scrum half took off. Once free, he had a British and Irish Lions full back to beat and was hurtling towards him head on, a hip move left, a sidestep to the right and Kearney was a beaten force while Marmion was charging to the line for what would prove to be the games most important score. Jack Carty’s kick was roared over by the Clan Terrace behind him and the lead was one point with twenty minutes left.

That such a lead was enough is testimony to the phenomenal discipline and application in defence that was prevalent throughout. David Heffernan led the tackle count with 18 in the 80 minutes. Aly Muldowney wasn’t far behind and Mick Kearney came off the bench with 31 minutes remaining to put in a colossal amount of hits, forcing at least two turnovers in the process.

In the backline, Niyi Adeolokun again showed his infectious enthusiasm and fearless attitude in the first half, 21 year old Darragh Leader was a commanding presence under high balls and swept the field to tidy up each Leinster punt downfield while Matt Healy marked his return from injury with a abrasive display in defence and a hugely impressive attacking effort.

The plaudits should stop at no one, the scrum was another high point. Having conceded two early penalties, the way in which Denis Buckley and Nathan White turned the tide to the point where they won a penalty five metres from their own line on half time was massively encouraging. What’s more, by the end, it was Rodney Ah You and Ronan Loughney locking down the final scrum that sealed the win. The depth is there it seems.

The sight of Lam running across the pitch on full time while being enveloped by fans, the shot of Dan McFarland in the dressing room at half time on the TG4 feed, calmly instructing his forwards, the roar for that Henshaw tackle, the chant of ‘we are top of the league’ (if only for 24 hours) from the clan terrace. It all adds up to something real, different and fresh.

It took Connacht until December 27th to reach the 12 point mark in the Pro 12 last year. This squad is a little older and wiser and the lessons have been absorbed it seems. Bundee Aki and Tom McCartney are going to have a lot of catching up to do when they arrive. They might need to borrow some notes from Mils Muliaina.