A lesson in power and simplicity 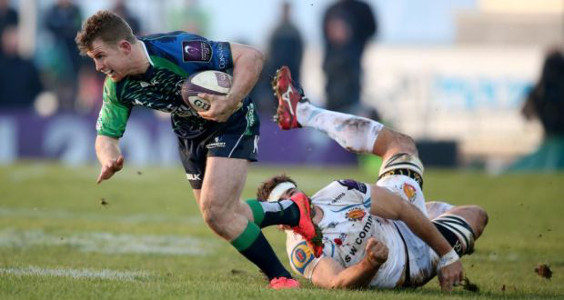 One scrum encapsulated the entire helter skelter contest in Galway on Sunday afternoon at the Sportsground, where England’s fifth ranked side gave Connacht a lesson in power and simplicity.

It was Exeter ball just inside their own half, and at three previous scrums they had obliterated Connacht, earning a penalty try in the process. We feared the worst but couldn’t have pictured it all the same. On this occasion Rodney Ah You was driven arse first into the air by Ben Moon as the home scrum crumpled.

That’s not a sight we’ve seen this year, and while the scrum is a complex area where little manoeuvres, legal or otherwise, can give a side an edge, even a novice could be forgiven for surmising that the 25 year old former English Under 20 loosehead was giving the Ireland capped Ah You a schooling to which he hadn’t the answers.

This was a second defeat in as many weeks and a performance that was out of kilter with anything we have seen at the venue this season. It has been quite a while since a side dominated Connacht up front in such a manner.

The familiar feeling was there in that regard based on seasons yore, but the way in which Connacht conjured up some spectacular tries in response reminded us that this side isn’t going to revert back to habits of old without a fight. Four tries, all stemming from some scintillating running, three in the first half for a 17-10 lead, meant that the five thousand or so supporters were kept captivated right to the end.

Alarmed because this was a competition in which many felt Connacht might contend for a place in the final, especially after their win in Bayonne. Once Munster were dispatched on New Year’s day, it was easy to allow oneself to believe Cup final appearance might be within reach, yet with English sides accounting for five of the quarter final positions, based on their travails in this contest, it seems highly unlikely that Connacht will be able to challenge.

All is not lost of course in terms of quarter final qualification despite this defeat. Results went the way of the westerners at the weekend meaning that a win in La Rochelle (next Saturday at 5:30 Irish time) of any kind should book a quarter final spot away to Gloucester barring an unlikely set of results elsewhere. A bonus point win will absolutely guarantee progress.

If they can overcome the French side, the last eight fixture would come
on the first weekend in April, sandwiched between crucial Pro12 games against Munster away and Ulster at home. Defeat would be high likely in that game, based on this evidence. Even if Nathan White and Jake Heenan are fit and well, the team as a whole is better rested and Bundee Aki is back, you’d still feel that the power of the English sides and their home form, will make that test insurmountable and the fixture almost, whisper it, unwanted.

Ironically, Sunday was the first time all season that Connacht started a game well. Dave McSharry and Robbie Henshaw linked superbly well. It was only the fourth time this season that they were partnered together for more than twenty minutes. The signs were good and the first try came on five minutes after multiple line breaks. Willie Faloon’s pass to Matt Healy in the corner was a joy to behold.

Healy had a stunning game on his return, having been left out for the games against Munster and Edinburgh. He made a scarcely believable 168 metres in the game and scored two tries. It was an open contest and had elements of a pre season feel to it at times. Both sides were playing with the shackles off, Connacht were clearly trying ‘wide wide’ rugby in an effort to stretch the Exeter pack.

The visitors came back with a penalty try from the scrum, that field position had been earned by some powerful forays forward from the likes of Dave Ewers and Tom Waldron, yet Connacht responded with a push over try dotted down by Faloon after another Healy break, this time the exquisite pass came from Henshaw.

As half time approached, Connacht sent the home support into raptures with a third try, a break on the blindside of the scrum from Healy set the platform before the ball came back across the field with McSharry and Muliaina combined to release Danie Poolman for his sixth try of the season.

To continue their trend bucking, Connacht had a dreadful start to the second half shipping ten points in five minutes. The try conceded to Dean Mumm was a gift from Poolman who forced a pass that was never on and saw it intercepted.

While Connacht laboured and lacked guile in their game plan, shunning kicks and trucking it up into contact, Exeter kept it simple and played to their strengths scoring 23 unanswered second half points before Matt Healy earned the consolation of a four try bonus point late on. Darragh Leader missed with a long range penalty soon after that might have earned a second bonus.

An early ankle injury to Robbie Henshaw had everyone, including Joe Schmidt, worried but he got it strapped up and ploughed on commendably. Dave McSharry took a knock and was withdrawn before half time for concussion. His loss was immense for a side that didn’t get the tackles in, allowing Exeter to beat 21 defenders in the 80 minutes.

The turnovers also hurt, Mils Muliaina had a brilliant assist on Healy’s try and his influence on the younger players in the squad is palpable but he’s in his 34th year and his ability to be an effective ball carrier from full back will rest on whether his carries turn into gains. Three times he took the ball into the tackle only to be turned over at critical junctures of the game.

Connacht were bulldozed up front at scrum time, turned over plenty of lineout ball with very little to show for it and were rattled by an 11-3 penalty count that was hard to argue with. This was a ninth game in as many weeks and the workload on a small squad definitely told here.

They scaled a mountain to beat Munster and the same energy hasn’t been evident in the last two games, but resting all the blame on that factor would be extremely foolish. Some serious flaws have been exposed in the last few weeks and with a pivotal run of games looming in February, rectifying that quickly could prove the difference in the top six hopes going belly up or them staying competitive.