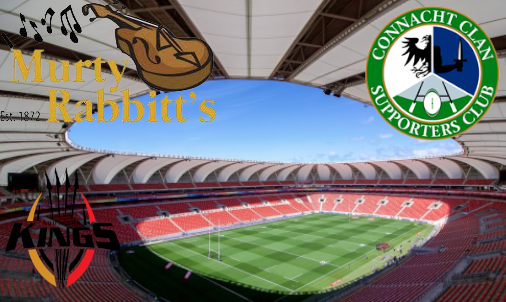 And the Clan are back on Tour! Connacht take on Kings in Nelson Mandela Bay Stadium!! Catch all the action live in Clan HQ, Murty Rabbitts!!

And don't forget that Clan Quiz on the 5th March! All welcome!!

pinky replied the topic: #67445 2 months 3 weeks ago
Whatever about the harsh red card, the decision not to yellow card anyone when Connacht were awarded the penalty try went against the laws of the game. It doesn't matter that they just got a yellow card on the play before, a penalty try means an automatic new one.
It was all irrelevant of course, I was sufficiently entertained by then.

Sol_ie replied the topic: #67420 2 months 3 weeks ago
Phew. Really pulled it out of the fire there in the second half. Really tightened up, very clinical in parts. Impressive.

There was inconsistency with the reffing at other points in the game. We get a straight yellow for not retreating ten, they are allowed infringe something like 6 times in the five meter area and get a warning.

In fairness, they did eventually get a yellow, the penalty try against them was given quickly etc.

overstrander replied the topic: #67419 2 months 3 weeks ago
Good result today after the red card. Job done. 5 points in the bag.

robrugby replied the topic: #67417 2 months 3 weeks ago
Enjoyed the match ... thought we were goosed when Robb went off for a very harsh red card ... he's a super player and should push for irish honours. Also thought Tom Daly , Kyle Godwin , Porch & Jack Carty did well when pinging to the corners. Ultan Dillane also showed up well in the tight.
Would have hammered them if not for the dodgy ref.

robrugby replied the topic: #67416 2 months 3 weeks ago
Great win , thought we were goosed when Robb was very harshly red carded - he's a super player and should push for irish caps. Was v impressed with the team that they did not fade away in the heat. Jack Carty pinging the corners also excellent.

Smolloy replied the topic: #67414 2 months 3 weeks ago
Anyone in Port Elizabeth for the game that we can meet up with for the game?

ShaneM replied the topic: #67404 2 months 4 weeks ago
Hopefully we will get a few in Rabbitts for this match. Could be a potential little bannaskin if we don't have a heads screwed on.
Hoping for a 5 pointer and NO MORE INJURIES #WishfulThinking

Sol_ie replied the topic: #67400 2 months 4 weeks ago
Looking forward to this match! Realstically, need to try and get the maximum out of this fixture. Kings aren't doing brilliantly, but you never know. They've yet to win a match at home this season, and their window to do same is narrowing.

Will be interesting to see who gets the nod this weekend. Might be no harm to let some lads who have some minutes built up have a breather, but equally don't want to take the foot off the pedal, like.
Read More...